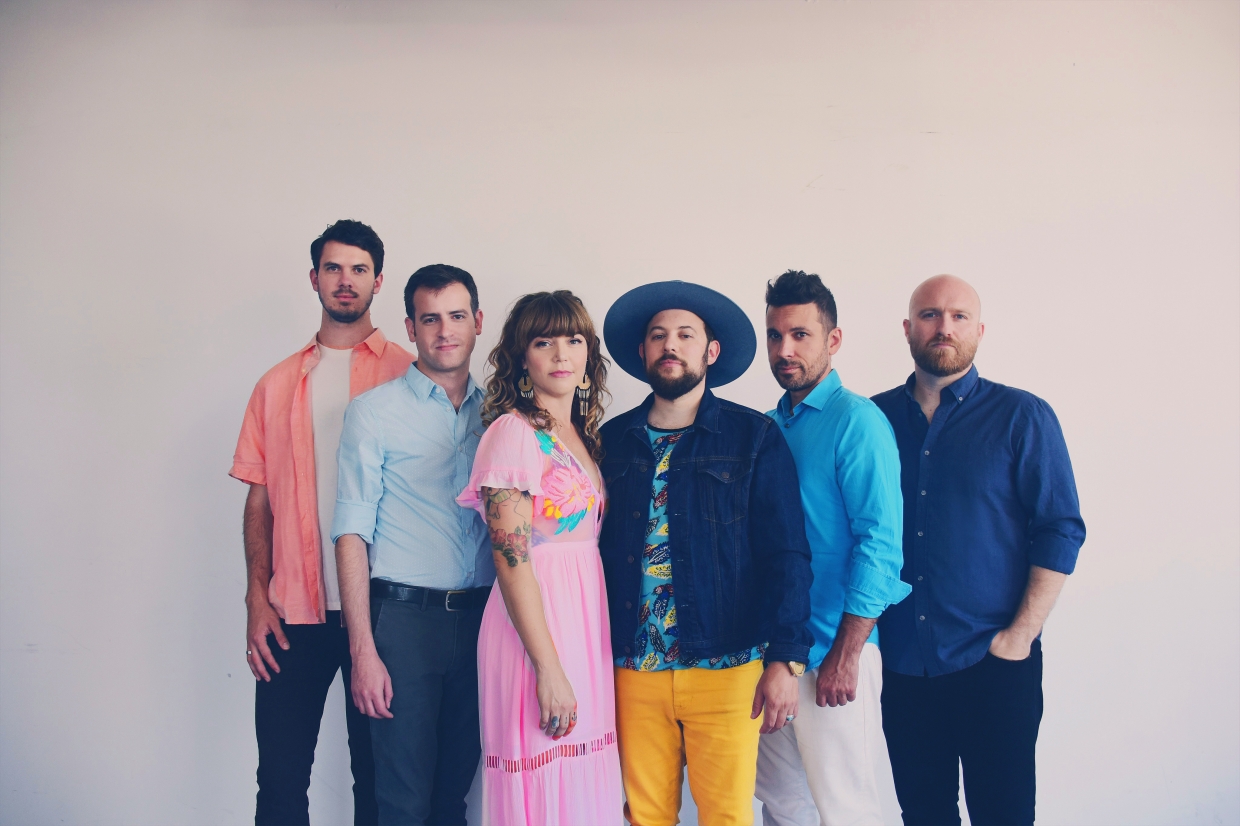 Dustbowl Revival has always been about pushing the boundaries of what American roots music can be. In many ways, they could have continued creating joyful, booty-shaking songs and cut-to-heart folk-rock ballads that lift up their transcendent live shows - and mining new energetic material from the place where folk music, funk and soul meet.

But the band’s newest album, Is It You, Is It Me, via their own Medium Expectations label and Nashville’s Thirty Tigers, is something different entirely. Produced by Sam Kassirer [Lake Street Dive, Josh Ritter, David Ramirez] and engineered by Brian Joseph [Bon Iver, Local Natives, Sufjan Stevens], it represents the latest stage in a band that never stops evolving and refuses to stand still.

After celebrating over a decade of sonic adventuring, playing thousands of shows together in ten countries and counting, and collecting a devoted and growing fanbase coast-to-coast, the six core members -- founder Z. Lupetin, Liz Beebe, Josh Heffernan, Matt Rubin, Ulf Bjorlin and Connor Vance --  knew they had to create something bigger.

The 13 new songs were not road-tested and tired out by the time they made it to the recording studio: in fact Kassirer inspired the band to create the album in a two-week flash of intense creativity, with many of the songs layered and composed day-by-day in the studio. Acting like a nimble rock orchestra, each member played multiple instruments, and the group brought in new musicians on symphonic brass, and local friends to sing as a spur-of-the-moment choir.

With the recent departure of longtime co-writer/mandolin player Daniel Mark (who co-wrote several songs on the new album) and bassist James Klopfleisch (replaced for the record by the talented Yosmel Montejo), Dustbowl Revival’s core members banded together and expanded their abilities to make the album come to life: Connor Vance stars on wildly inventive violin and for the first time on harmonizing electric guitars, Matt Rubin shines on trumpet, fluegelhorn and doubles on vintage keyboards, Ulf Bjorlin sets the tone on ever-brash and sometimes surprisingly tender trombones, and Josh Heffernan brings it all together on his rock-solid and always exploratory drums, and a plethora of percussion.

“I feel like we grew up for real on this record,” Lupetin adds. “Both as musicians who have come of age on the road together as a kind of accidental family -- and as collaborators making music even we don’t know how to describe or pin down. It’s exciting and a bit terrifying.”

Where does it all lead? If one thing is clear, Is It You, Is It Me represents another large leap forward for Dustbowl Revival, coming after their acclaimed self-titled 2017 album. Produced by Grammy-winner Ted Hutt (Old Crow Medicine Show, Drop Kick Murphy’s), It transitioned the group from a “roots dance party band” that continues to thrive on the festival circuit, to a nuanced ensemble embracing more soulful territory. That self-titled record was a direct bridge to the newest work, rising to number one on the Amazon Americana chart and featuring a funky favorite “Honey I Love You” where the band joyfully teams up with blues master Keb Mo’. Their heartache folk number “Got Over”, surprised the band by racking up nearly seven million streams and counting online.

Dustbowl Revival’s story started humbly. Nearly 12 years ago Z. Lupetin - a Chicago native who attended college in Michigan came to L.A. to be a playwright and screenwriter, grew disillusioned with his job in advertising, and placed a hopeful ad on Craigslist. He sought to find fellow musicians who shared his roving love of Louis Armstrong, Bob Wills, Old Crow Medicine Show, Paul Simon, Aretha Franklin and the brass bands of New Orleans, but also wanted to write songs like Americana pioneers Wilco, Lucinda Williams and even Bruce Springsteen. There are still players in the group who responded to that initial odd quest.

More in this category: « The Travelin’ McCourys The Brothers Comatose »
back to top
Copyright © 2011 - 2020 OFOAM.org
All Rights Reserved.