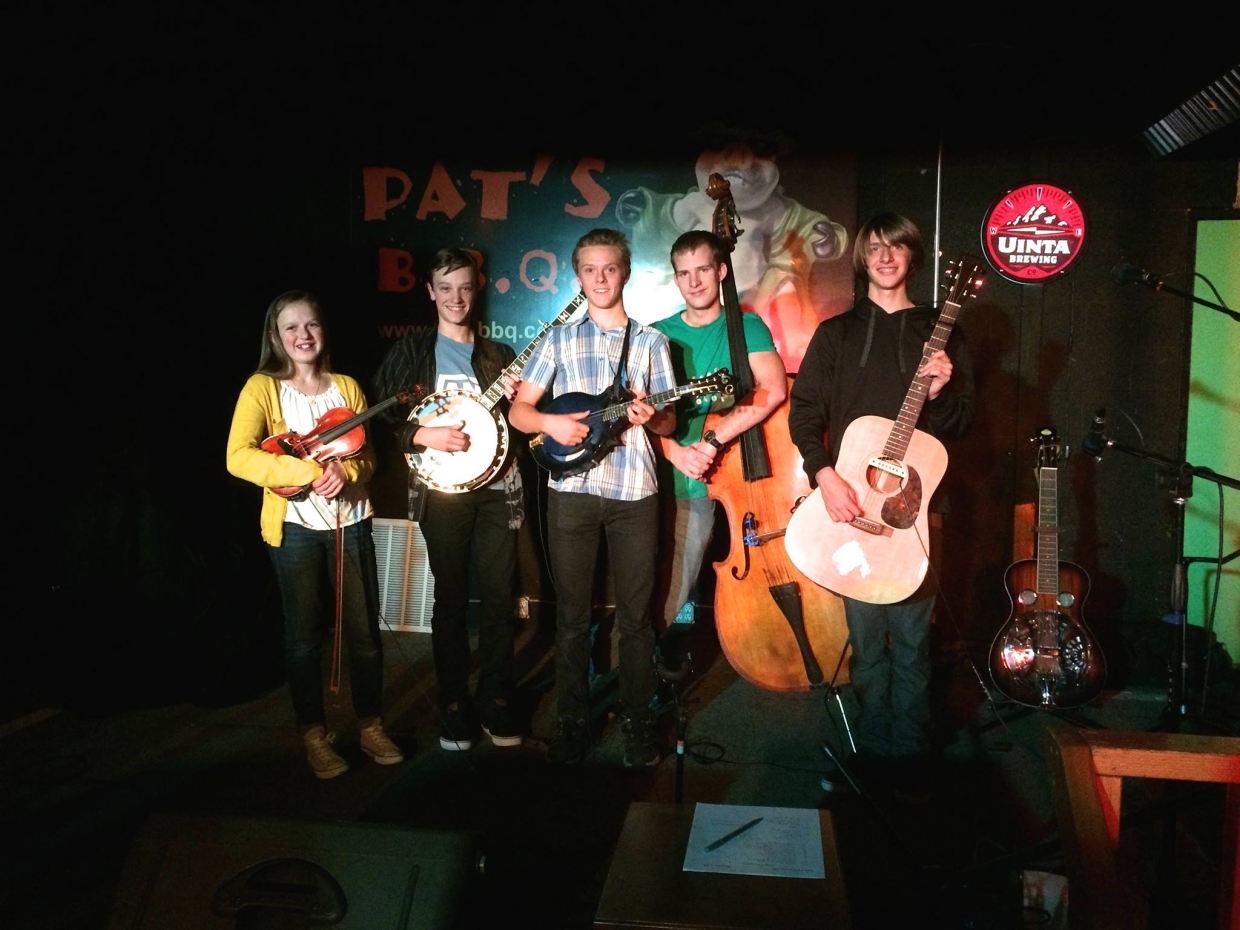 Flint & Steel Bluegrass: A Utah based group of amazingly talented thirteen year old musicians playing an assortment of bluegrass, country, jazz and pop music. Since organizing in December of 2012, this young group has delighted audiences throughout Utah, playing at the Ogden Music Festival and the Old Capital Arts Festival in Fillmore, among others. They have opened for Silver Creek, The Bar“D” Wranglers, Trotta & Ronstadt and Ryan Shupe And The Rubberband. These kids are becoming the rising stars in Utah's acoustic scene, so check them out and hire them, YOU CAN'T GO WRONG!

Abby Clayton, age 13, has played the violin since she was 3 yrs. old. She studied the Suzuki Method with Asheley Madsen Watabe for 8 years. She recently discovered a love for fiddling and is currently taking lessons with Ryan Shupe. When Abby joined Flint & Steel a year ago she never anticipated singing. Soon the band realized she had the talent and now sings several of their songs. In addition to playing the violin, Abby loves soccer, water skiing, babysitting, going to concerts and hanging out with friends.

Garrison Asper plays guitar, and is a vocalist for the band. He is an eighth- grade student at Wasatch Junior High, were he also plays viola for Concert Orchestra and guitar for the Jazz Band. Garrison recently won first place in the Utah Old Time Fiddlers & Country Music Association’s State Contest in the Junior Guitar division. Garrison was awarded second place, Amateur Flatpicking, at the Utah State Competition at the Ogden Acoustic Musical Festival in 2013. Garrison enjoys a variety of music genres, including Rock & Roll, Folk, Blues, and of course, Bluegrass. Garrison loves living in Utah, taking advantage of all it has to offer. He is an avid skier, mountain biker, river rafter, and fly-fisher.

Mandolin Champion from the 2014 Utah State Instrument Championships, Andy Knoblock is 13 years old and plays mandolin for Flint and Steel. Andy has lived in Salt Lake County most of his life except for three years in north Lake Tahoe. He has been best friends with band mates Garrison and Graham since kindergarten. Besides mandolin, Andy plays violin in the school orchestra and classical piano at the University of Utah. Andy recently won first place in the Utah Old Time & Country Music Association’s State Contest in the Junior Mandolin division. He's an excellent student, loves to read, play soccer, play chess, play disc golf, mountain bike and ski. Andy has been going to the Telluride Bluegrass Festival since he was two years old and after seeing Sam Bush play in 2010 he declared "Dad, I've gotta get a mandolin!"

Banjo Champion for the 2014 Utah State Instrument Championships, Graham Northrop is the banjo and dobro player for Flint & Steel. He is 13 years old and lives in Salt Lake City, Utah. He’s been playing the banjo since December of 2012 and the dobro since May of 2013. Graham recently won first place in the Utah Old Time Fiddlers & Country Music Association’s State Contest in the Junior Banjo division. In addition to playing bluegrass music, Graham plays viola in his junior high school orchestra. He also plays piano, acoustic and electric guitars, and mandolin. Outside musical interests, Graham enjoys skiing, disc golfing, and mountain biking.

Ethan Stewart is 13 years old and has been listening to bluegrass since the day he was born. He has spent every summer of his life playing and jamming at music festivals like Grand Targhee, Four Corners, and Hope, Alaska. Ethan plays multiple instruments including: stand up and electric bass, mandolin, guitar and sax. He has been playing with his junior high school jazz band since seventh grade and looks forward to playing with the high school jazz band as a freshman next year. He enjoys roller blading, snowboarding and has a unicorn named Shanana.