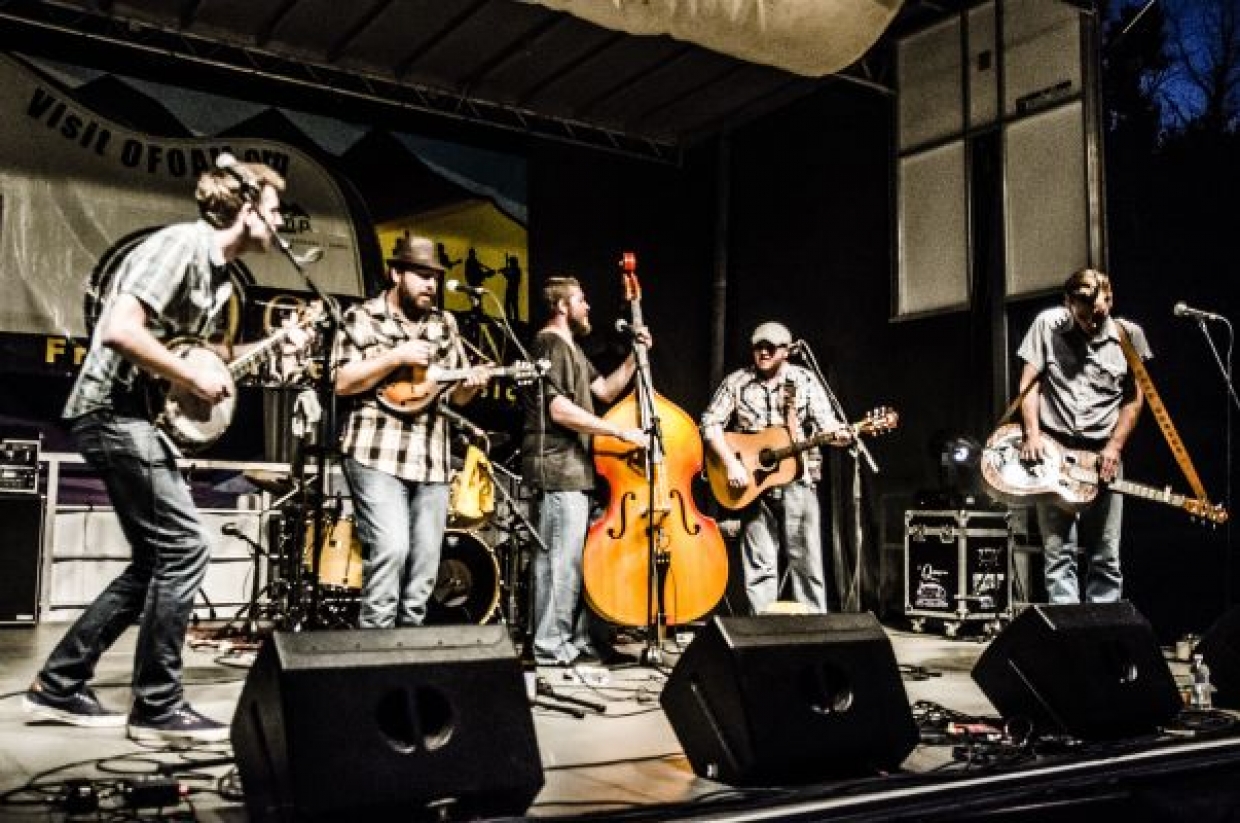 The dynamic bluegrass quintet from Springfield, MO with their high-octane shows, tight harmonies and stunning instrumental prowess, have been winning fans and making waves at every festival they have been invited, and consequently re-invited to since their formation in 2008. Recently signed to Nashville-based roots music company the Compass Records Group, the HillBenders will release their new album Can You Hear Me? on September 25th, presenting an intensely charismatic album imbued with the spirit and energy of their live shows. "Our music appeals to anyone that can enjoy a fun performance. We share a passion for the music, a passion to perform," says guitarist Jim Rea, "It's evident we have fun on stage. People come up to us and say sarcastically, 'liven up!'"

Thus the challenge in recording Can You Hear Me?" was clear — the band had to capture their undeniable live appeal on the twelve tracks, eight of which are originals. Lead singer and mandolinist Nolan Lawrence with Jim Rea and his cousin Gary Rea on guitar and bass respectively, banjoist Mark Cassidy and Dobroist Chad "Gravy Boat" Graves channeled the rawness and intensity of bands like Newgrass Revival into the carefully executed arrangements. They worked closely with roots music engineer and producer Bil VornDick for an album that aligned their diverse tastes and styles while showcasing the collective talent of each band member, including a grassified cover of the Romantics' "Talking in Your Sleep" and Hal Ketchum's country hit, "Past the Point of Rescue," which includes a samba-grass breakdown after the second chorus.

The album-opening "Train Whistle," is a rambling train song, a staple to the bluegrass band, though the band hesitates the genre distinction. "Bluegrass is where we found our voice as performers, so we feel like we owe a lot to it. We have one foot in bluegrass all the time while the other is reaching out and exploring our interests in rock and roll, jazz, funk and Americana," says Chad. By winning the Telluride Bluegrass Band Competition in 2009 and the National Single Microphone Championship the following year, the band became favorites on the bluegrass festival scene with their own brand of acoustic fusion. "A lot of people, even at the more traditional festivals, tell us 'You guys are so fun to listen to!' This comes from the die-hard traditionalists. They are saying that it is really refreshing to see something new. At the same time we're not afraid to be looked down upon – all of that formality melts away when we just be ourselves."

The HillBenders recognize their ability to bridge the gap between the common music consumer and the bluegrass genre, selecting material for the album that defies any hillbilly stigmas. Nolan comments, "With our widely varied influences, we're all trying to bring in songs that unify. We wanted to pair bluegrass with the other American music we grew up with —rock and roll!" Their festival appearances also reflect the crossover; the band recently played the very traditional Gettysburg Bluegrass Festival and the esteemed Philadelphia Folk Festival on back to bay days on the same weekend.

Still, the heart of the new album draws from the band's live performances. Nolan adds, "If the music isn't played with intensity, you can tell. You have to play the music with that passion or it just isn't going to sound right." Can You Hear Me? is an album that showcases a young band with ambition and talent at a volume that comes across loud and clear.