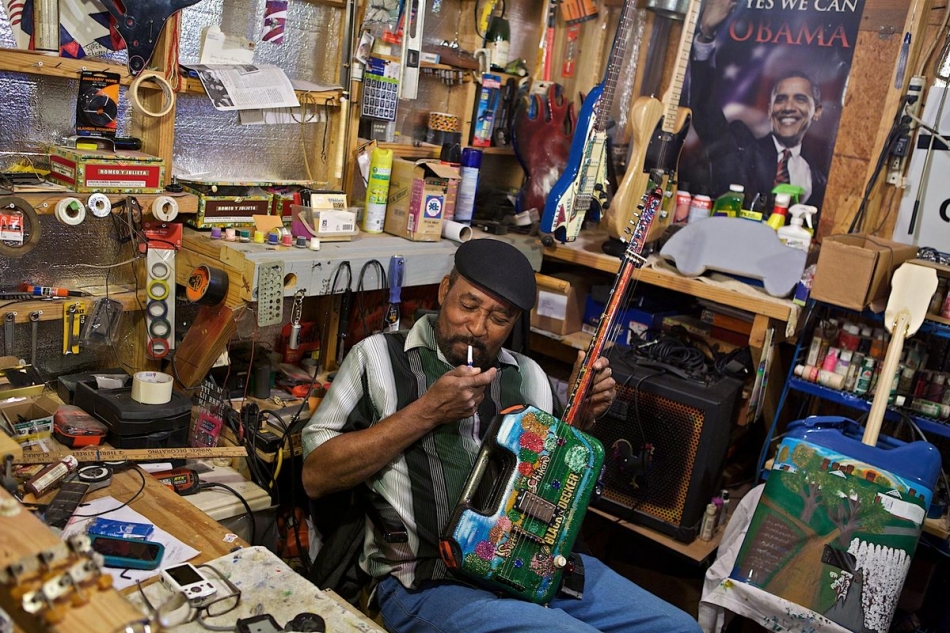 One of the last remaining Old School Mississippi Blues Musicians and a "present-day exponent of an edgier, electrified version of the raw, uncut Delta blues sound."

James "Super Chikan" Johnson is a Blues Music Award winning American blues musician, artist and guitar maker based in Clarksdale, Mississippi. He is the nephew of fellow blues musician Big Jack Johnson. James Louis Johnson was born in Darling, Mississippi on February 16, 1951. He spent his childhood moving from town to town in the Mississippi Delta and working on his family's farms. He was very fond of the chickens on the farm, and before he was old enough to work in the fields, he would walk around talking to them. This led his friends to give him the nickname "Chikan Boy". At an early age, Johnson got his first rudimentary musical instrument, a "diddley bow", which was simply a piece of wood with a piece of baling wire stretched from end to end. As he grew up, he came up with new ways to improve and vary the sounds he could make with it, and finally, in 1964, at the age of thirteen, he bought his first guitar, an acoustic model that had only two strings, from a Salvation Army store in Clarksdale.

As an adult, “Super Chikan” began driving a truck for a living. During the long stretches on the road, he began composing his own songs. When he showed some of the songs to his friends, they convinced him to go a studio and record them. He then started playing with some renowned local musicians, but he decided he would rather perform on his own than try to conform his style to that of his band-mates.

He did so, and in 1997 “Super Chikan” released his debut album, Blues Come Home to Roost, influenced by such musicians as Muddy Waters, John Lee Hooker, and Chuck Berry. He went on to release What You See in 2000, Shoot That Thang in 2001, Chikan Supe in 2005, Sum Mo Chikan in 2008, and Chikadelic in 2009, which was awarded the 2010 Blues Music Award for Traditional Blues Album.

Welcome To Sunny Bluesville, Super Chikan's latest CD, was recorded at XM / Sirius Satellite Radio's state-of-the-art performance studio in Washington, DC. It features both Chikan solo and with his band, The Fighting Cocks.

In the Clarksdale area, "Super Chikan" is probably best-known for performing regularly at Morgan Freeman's Ground Zero blues club, and for being Freeman's favorite blues performer. “Super Chikan” has toured and performed at festivals in Africa, Iceland, Japan, UK, Denmark, Canada, Mexico, Finland, France, Italy, The Netherlands, Norway, Poland, Russia and Switzerland, and has performed for the President of the United States. He was recently nominated by the Blues Foundation, for his second year in a row, the Blues Music Awards for BB King Entertainer of the Year and Traditional Male Blues Artist.

Last year, he was honored with four nominations, including BB King Entertainer of the Year, Song of the Year for "Fred's Dollar Store", Traditional Blues Male Artist, and he won the BMA for Traditional Blues Album of the Year for Chikadelic. He was previously nominated for the Best New Artist Blues Music Award in 1998, and has received five Living Blues Critics Awards. In 2004, “Super Chikan” received the Mississippi Governor’s Award for Excellence in the Arts.