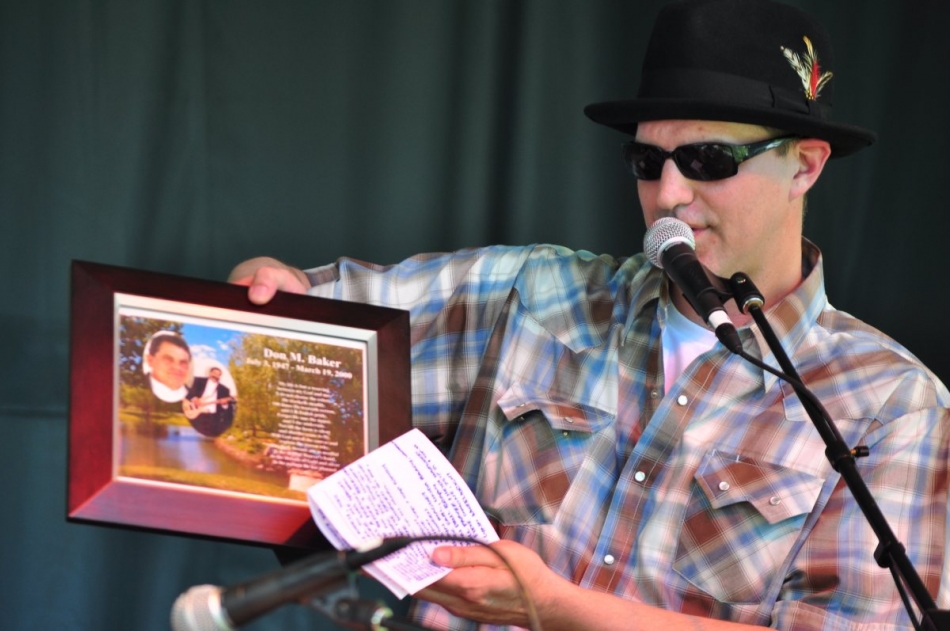 The Ogden Friends of Acoustic Music debut a special honor this weekend during the Ogden Music Festival with the Don Baker Award, which will be presented to Brad Wheeler, a local bluesman and radio host.

Baker was a musician and music shop owner (as well as an investigative newspaper reporter), who passed away in 2000. Baker helped mentor many musicians in the Ogden community.

The debut Ogden Music Festival in 2009 featured a tribute dedicated to Baker. This year, festival founder Michelle Tanner and the OFOAM organizers decided to choose a person during each festival to honor with the Don Baker Award.

An Ogden-born man now of Salt Lake City, Wheeler is a musician, a former Ogden nightclub manager, and weekday host of KRCL 90.9 FM's afternoon drive-time show. He has also made an impact on tens of thousands of elementary schoolchildren, delivering harmonicas and lessons in music and life through his Blues in Schools educational program.

"I think Brad is the perfect candidate," said Tanner. "The main criteria for our award is it be someone who has an impact on the Ogden music scene, a very positive impact. From booking really interesting things at the bar (Beatniks) to Blues in Schools -- and he is still is a strong influence with his regular music gigs at The Horse (private club in Ogden) and The Blues News calendar e-mail he sends out. And of course, he has a lot of fans in this area for his show on KRCL."

"Honestly, it surprised me," he said. "I do think about (Ogden musicians) Roby (Kap) and Joe (McQueen) and think they deserve it more for their musical contributions."

Wheeler laughs. "But then, Joe might just say, 'Man, if I get another award, I don't know where I would put the thing!' "

Wheeler said his work at Beatniks (now fused with its sister bar, Brewskis) was in part a result of the stories that Kap, another of his mentors, had told him as a youth about a defunct Ogden bar called The Gray Moose.

Before managing Beatniks, Wheeler helmed a blues bar in Salt Lake City called The Dead Goat Saloon. When he came back to his hometown of Ogden, he wanted to bring that touring circuit to Ogden and, in a sense, give The Gray Moose scene a rebirth.

Wheeler worked to draw touring classic and contemporary blues and roots-rock acts to Beatniks on Tuesday nights, and to give young local bands a place to learn their craft and build followings.

Tanner said the prize will include some sort of trophy, as well as goods provided by OFOAM festival sponsors.

"Brad has told me he's always wanted to do the iFly (indoor skydiving at The Junction), so we are arranging that for him," she said.

Tanner laughed and added, "And of course he loves to wear his hoodies, too, so we will get him one of those, as well, and some other fun little things."

Wheeler noted that his work with kids in Blues in Schools is in large part directly attributable to Don Baker's kindness and expectations of him. When as a teenager Wheeler went to Baker's Roy-based NuSound music store to purchase his first professional harmonica, he found himself about $20 short of the asking price. Baker gave it to him anyway -- but only after making Wheeler swear to take deadly seriously the learning of the instrument.

"Don absolutely called me out, staring me down and asking me if this was something I really wanted to do -- made me commit to him that I would practice this instrument," said Wheeler.

"Of course, I am not alone. He meant so much to so many -- and not just musicians, either. He put sound systems in various churches for almost nothing, just to help them out. And on top of that, he was out fighting crime as a reporter! What an amazing man."

Wheeler said he hopes he does not break down in tears when he accepts the award, so truly honored and humbled is he by being chosen.

"It chokes me up for sure. Me -- getting the Don Baker Award? Because really, when you get right down to it, I already got it years ago, when he gave me that other $20 for my first harmonica."